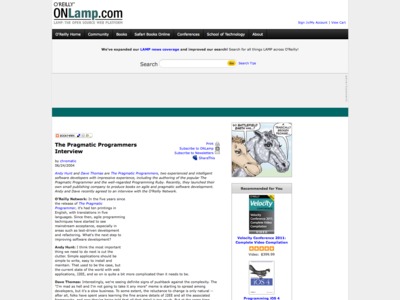 "Andy Hunt: [...] Simple applications should be simple to write, easy to install and maintain. That used to be the case, but the current state of the world with web applications, J2EE, and so on is quite a bit more complicated than it needs to be.

Dave Thomas: Interestingly, we're seeing definite signs of pushback against the complexity. The "I'm mad as hell and I'm not going to take it any more" meme is starting to spread among developers, but it's a slow business. To some extent, the reluctance to change is only natural -- after all, folks have spent years learning the fine arcane details of J2EE and all the associated frameworks, and now they're being told that all that detail is too much. But at the same time, they're seeing the benefits of using tools such as Spring, Hibernate, Pico, and so on. We're even seeing folks abandon the J2EE world entirely in favor of lighter-weight solutions when appropriate. This wouldn't have happened two years ago, where a "Hello, World!" web app still needed 17 deployment descriptors to install. [...]

Dave: [...] Java and C# are not really dynamic in any meaningful way. Memory management is a small part of the picture, but the real gains in these more dynamic languages come from different areas, particularly from a flexible type model and from the ability to metaprogram.

Ultimately, it comes down to ease of expression. If I can express myself in code at a level closer to the problem domain, then I'm going to be more effective, and my code is likely to be easier to maintain and extend. Paul Graham makes a big deal out of the way Lisp helped him while building the software that became Yahoo Stores, and he's right. These languages, applied properly, are a strategic advantage. I know some companies are using them with great success. And you know -- they're keeping quiet about it."