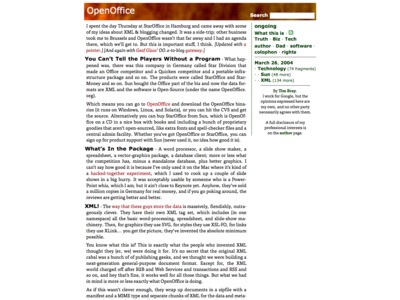 Tim Bray, one of the inventors of XML, gets excited about OpenOffice - seems like good software is made in Hamburg, Germany :-) ...

"The way that these guys store the data is massively, fiendishly, outrageously clever. They have their own XML tag set, which includes (in one namespace) all the basic word-processing, spreadsheet, and slide-show machinery. Then, for graphics they use SVG, for styles they use XSL-FO, for links they use XLink... you get the picture, they've invented the absolute minimum possible.

You know what this is? This is exactly what the people who invented XML thought they (er, we) were doing it for. It's no secret that the original XML cabal was a bunch of of publishing geeks, and we thought we were building a next-generation general-purpose document format. Except for, the XML world charged off after B2B and Web Services and transactions and RSS and so on, and hey that's fine, it works well for all those things. But what we had in mind is more or less exactly what OpenOffice is doing."

But: "This is now one of the world’s largest Open-Source projects (Sun is paying several floors in a big building full of people to work on it, and there are tons of other contributors), and it has really lousy visibility. These are interesting people and they know more about XML and portable on-screen rendering and struggling with print drivers and so on than just about anybody, and the world needs a few voices out of North Germany writing about all this stuff and also about what it’s like to compete with Microsoft Office."