"You can be very clever with some scripting languages and do things you can’t do with regular Java," said Mukund Balasubramanian, CTO of Redwood City, CA-based Infravio, a Java and Web services integrator. "If you know how to use a good scripting language, you can save a lot of time and money in development."

Why isn't my time zone highlighted on the world map?

Raymond Chen: "The Indian government threatened to ban all Microsoft software from the country because we assigned a disputed region to Pakistan in the time zone map."

"1. Use Whitespace and Comments 2. Write Tests 3. Group the Alternation Operator 4. Use Lazy Quantifiers 5. Use Available Delimiters"

PHPEclipse.de has (German) installation instructions for PHP support within the Eclipse IDE.

I'd love to go to school again: "The Diocese of Columbus Department of Education is undertaking one of the first wide-scale deployments of Tablet PC technology in an educational environment. They have partnered with HP and their TC1000 Tablet PC."

Mindmeld seems to have a rather narrow focus, but the description sounds nice (and it's free software):

"Mindmeld is an enterprise-capable knowledge-sharing system. It is an effective tool for any web community that needs to capture and share information, and is unique in that the knowledgebase grows smarter every time it's used. It only knows what you teach it, but it's very easy to teach.

Mindmeld's core search technology, the self-organizing neural mapper, allows Mindmeld to incorporate terms used in each search into a contextual map of the answer itself, continually improving Mindmeld's ability to derive contextual information from a given search. The system learns how people typically search for a given answer by identifying which search terms are most valuable in any specific context." 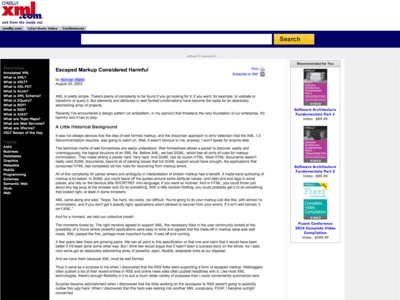 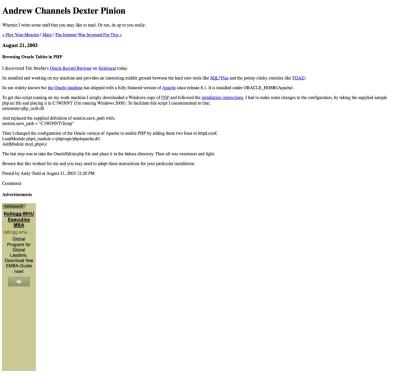 It's always a joy to see that some friendly person uses, and even promotes, software you've written - in this case, my OracleEditor.php script.

Gary Burd and Adam Shand both compiled lists of new, interesting “information client” software (the likes of Chandler and Haystack)…

Robin is a "desktop on a web page", written in Mozilla's XUL. Slow, but demonstrates XUL's capabilities.

Dented Reality: "HTFS is a project I am working on where I am basing a complete, database-driven "file-system" on the concept of hyper-text, but with one added benefit. Rather than allowing the situation in hypertext where you can link to something that then moves (same situation as with a shortcut or symlink on normal filesystems), I am making this system use unique IDs, so that once something is linked, it will remain linked, no matter what context it moves to [...]"

Andrea Laue brings together Topic Maps and Graphviz: "I modeled the game as a topic map, used XSLT to transform the data into a "dot" file, and then used Graphviz to generate some visualizations."

FreeBSD.MU: "[...] countless hours of gameplay have rekindled my dormant interest in artificial intelligence and artificial neural networks (ANNs). In this article, I will document how I implemented an ANN using the PHP scripting language."

Am I the only one who hates all those links that open in a new browser window? There seem to be more and more of them.

My browser does have a Back button, "Back" navigation via keyboard shortcuts, and a History window. Furthermore, I can manually choose to open a link in a new window, or a new tab, in foreground or background, if I prefer to keep the current page open.

So many powerful choices that let me decide what's happening on my screen. And yet, so many annoying pages that refuse to disappear from my screen when I'm trying to surf away. (And no visualization that would allow me to see which target this link will open in.)

Yes, I know that "target" can make sense - especially if it's a web application rather than a website, or if you'd like to open a preview/details window and not lose the current context. But for plain old hypertext links from a page to another page, this does not apply.

Mozilla does a great job in blocking unrequested popups. Maybe they could add an option to block unrequested new windows as well?

"Conclave is an experiment on the part of me (GuyMurphy) to see what common groud there is between WikiWikiWeb (wikis), TopicMap (topicmaps), and WebLog (blogs) concepts."

MozPHP: "MozPHP is a Mozilla PHP integration package. With MozPHP you can execute PHP scripts in Mozilla directly without the need for a local HTTP server."

A Few Tips for Writing Useful Libraries in PHP

Kellan Elliott-McCrea seems to be right that "of all of PHP's many faults and quirks, perhaps it's most telling (and most crippling) is a cultural one, PHP programmers write applications, not libraries."

phpLDAPAdmin: "phpLDAPAdmin is a web-based LDAP administration tool, written in PHP. You can browse your LDAP tree, create, delete, edit, and copy entries, perform searches, and view your server's schema."

Five Lessons You Should Learn from Extreme Programming

ONLamp.com: "One of XP's catchphrases is "Do the Simplest Thing That Could Possibly Work." Solve the problem as simply as possible to get the job done correctly. Don't spend time creating a generalized solution (or worse, a generalized framework) if you don't need it yet."

Hauke and I built a browsable cardfile in CSS/Javascript - how lovely!

A List Apart: Practical CSS Layout Tips, Tricks and Techniques tells us how to use the CSS float property to build "tables" that automatically wrap when the browser window size changes... 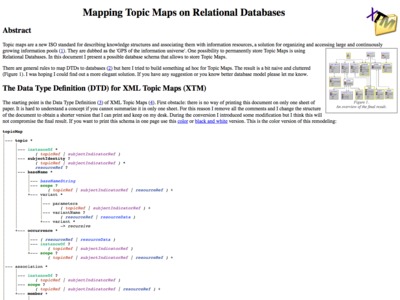 SimpleT: "SimpleT takes the view that PHP already is an excellent template language and when used purely for that purpose, is very easy for web page designers to work with." "SimpleT takes advantage of PHP's output control functions to allow the correct seperation of Model from View (or Application Logic from Presentation Logic)."

This Oracle "Statement of Direction" says that:

And on today's index page of the new Oracle Open Source Developer Center, four of the five featured articles are on PHP...

Zend: "Zend's PHP survey is a market snapshot of the PHP community. Over 10,000 respondents to the survey which was posted in June 2003."

Seems like few participants actually sell and deploy software written in PHP, as only 11% have applications hosted by their clients.

And only another 11% have an application with more than 50,000 lines of code.

A nice example of Topic Map browsing, made by Bond University, Australia. 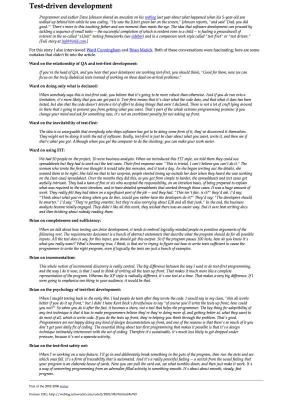 Ward Cunningham citation: "When somebody says this is test-first code, you believe that it's going to be more robust than otherwise. And if you do run into a limitation, it's more likely that you can get past it. Test-first means that it's clear what the code does, and that what it does has been tested, but also that the code doesn't devote a lot of effort to doing things that aren't declared." 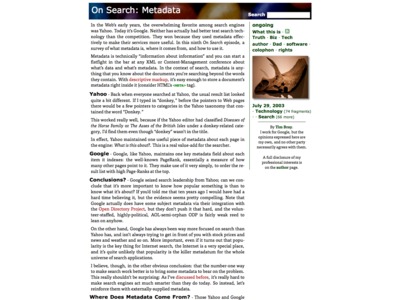 "If You Collect Metadata By Hand

The most important lesson I've learned, is: Don't try to collect too much. You might, just might, get people, when they're interacting with your intranet, to label their information by project and title; but more than a couple of fields and people will just bypass the process.

This is harder than it looks. When you decide in principle that metadata should be collected, it will develop that many stakeholders have short-lists of the fields they need to make this worthwhile. You can easily end up with a "short" list of a dozen or more fields that constitute the "absolute minimum" that people think you must have. And if you adopt it, you're deadd, because except in special circumstances (e.g. the WSJ), people just will not take the time to do this.

Obviously, there are some metadata items the computer will give you for free: a filename, created/modified dates, who created it, what kind of file (HTML, Excel, PowerPoint), how big it is. These can be handy for search applications and since they're free, you should collect them and make them available."

The future of XML documents and relational databases 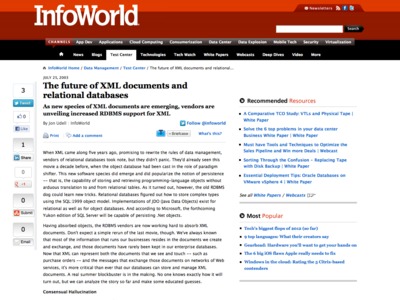 Jakob Nielsen: "Spare your users the misery of being dumped into PDF files without warning. Create special gateway pages that summarize the contents of big documents and guide users gently into the PDF morass."