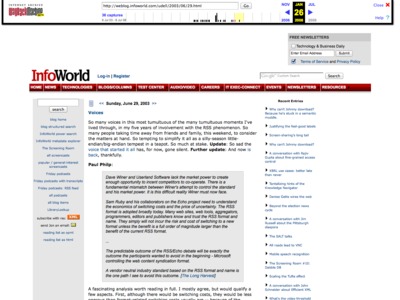 "I've been a Wiki (and a Ward Cunningham) fan for years, but I would say that Wiki, too, is suboptimal for the task at hand. Ideally XML, not raw ASCII text, would be the stuff that was written, and refactored, and then mined to produce coherent views. We have no tools that come close to enabling that to happen. Such tools, combining the power of XML with the flexibility of freeform text, and operating on a universal canvas, are what will really drive mainstream adoption of a two-way Web."

"[...] we're not going to have a semantic web until regular people can effectively write it. Weblogs were a major step forward, [...]"

"I've written recently about finishing work. Jean Paoli has dreamed for half his life of bringing XML to the masses, and he well knows that Microsoft's ability to pour resources into usability analysis and finishing work is his best shot at making the dream real."